Noble boutiques, luxury boats, high-class hotels: Portofino (still) has everything what puts out a playground for empires and beauties. Who searches moreover still change, Estelle `see exclusive escort books as an exciting travel company there.

The soft bedded in gentle green hills 500-inhabitant village of Portofino in the small, sheltered bay on the Gulf of Tigullio, near Genoa is and remains a gem. No hotel bunker, no through traffic, no futuristic experiments disturb the eye. Instead radiate the narrow fisherman's cottage in perfectly matched mustard yellow, ocher, pink and russet vied. The turret occupied, venerable villas on the hills, the towering over the place Castello Brown and paved Piazzetta play their part to do so. One can well understand that the former fishing village of Italians - and not only those - as the epitome of beauty and wealth applies. 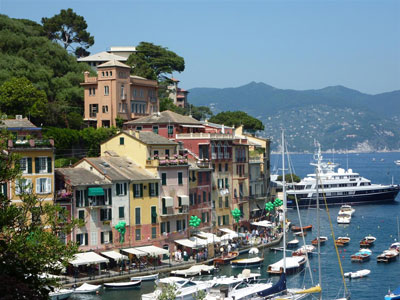 Here the Who is Who of the fashion world, theatrical world and political world meets.

Sophia Loren, Brigitte Bardot and Frank Sinatra fell in love with Portofino Charm in the 50s and 60s, today are it Berlusconi and the Agnellis, Armanis and Pradas of this world which enjoy themselves regularly in the idyllic, but exclusive scenery. The chances to meet public figure project in via Roma, and in Hermès-and Gucci stores, with a stroll in the harbour or in one of the Caffès really well. Only during the film festival of Cannes directorial legend Steven Spielberg with his 200-million dollar yacht anchored a few days in Portofino – with canvas beau Leonardo DiCaprio aboard. A few weeks before Kevin Spacey, Jean Reno and Cate Blanchett called in for an Uhren-Shooting.

Chiesa San Giorgio above the roofs of Portofino is a nice sight – and grants a fantastic overview.

As a relaxed place to the People Watching the bar "Mariuccia" is recommended directly in the Piazzetta and cosy harbour of Molo Umberto. However, it offer in the „most famous fishing village of the world“ how just once two square kilometres of small municipality are called with pleasure, still several others. All the same where one sits down to the Caffè, one should get involved in a serving Paciugo, in any case. The sweet mix from cream, chocolate ice and water ice with fruit pieces which is mixed with inlaid cherries is a real speciality of Portofino.

Fresh strengthened it is getting better, because from above Portofino looks even more enchanting. As elated vantage points the Castello and the venerable hotel of "Splendido" which many hold for the nicest hostel of Italy are suited. One of the most expensive ones is determined they, with about 1000 euros of room price the night. Or one immediately smashes the way in the direction of San Fruttuoso. In addition one saunters best of all animated via Roma in opposite direction to the harbour up to the rear district along, until it is not animated any more. At the end a stair way marked with two red points goes up. The precipitous rise makes be beating the heart faster, the view in the comb, however, selbiges. Now one says look out hold after the right signposts, finally, several other travelling variations still lure: The whole peninsula – in wise foresight quite early to the Parco natural ale declared – is covered with twelve marvellous routes.